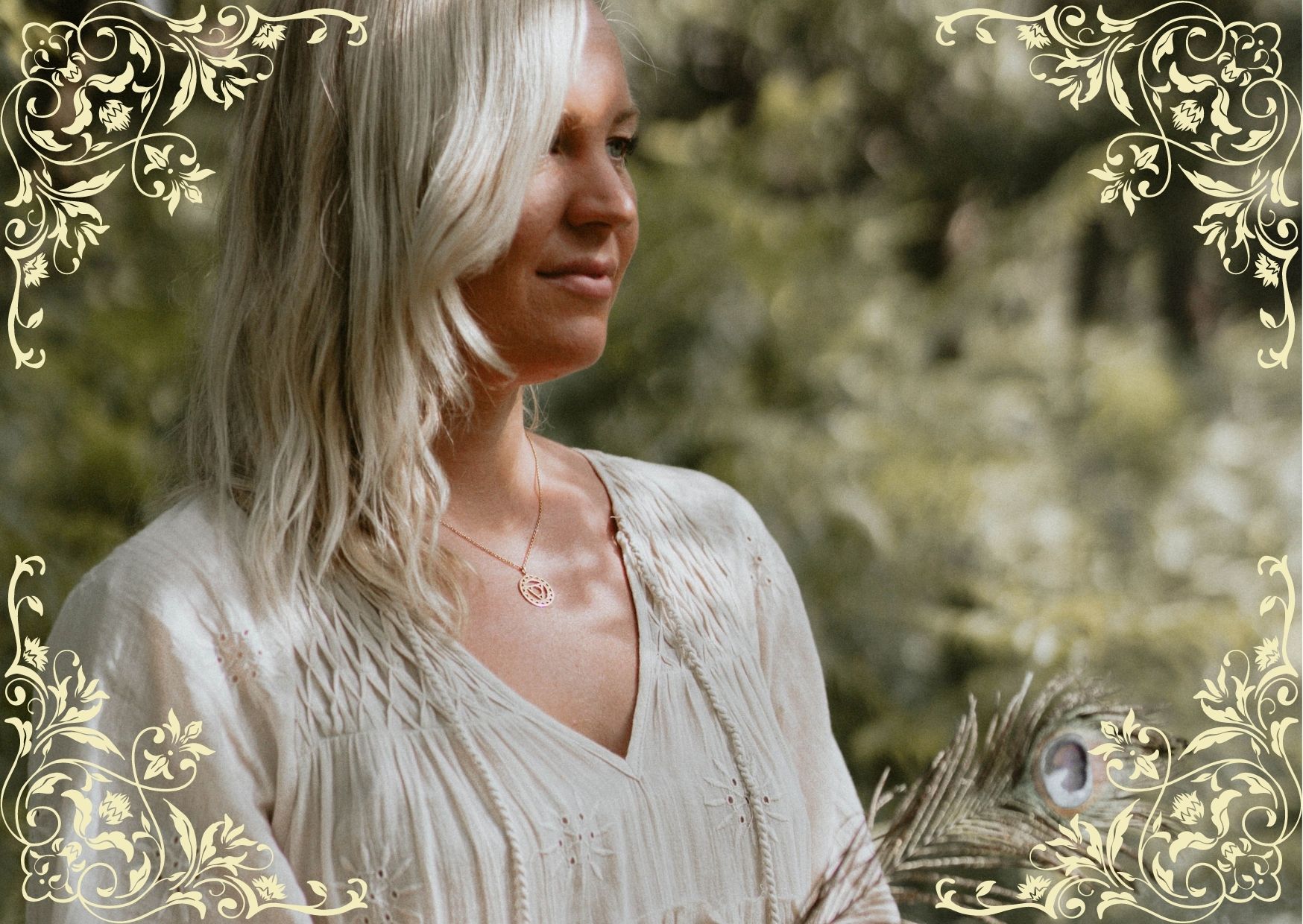 When Josie Danielle became mother to daughter Violet, a transformation into a way of being opened up to her. From using sound, light language and energy healing to holding space for womb centred ceremonies her practice evolved as she moved from Maiden to Mother. Jennifer sat down with her to learn more.

“Even as a young girl I was connecting to my dreams, my intuition, my psychic abilities and connecting to spirit.” Josie Danielle, once awarded the accolade of east London’s most popular white witch, is recalling her earliest connection to spirit. Connecting to spirit from a young age is something that many people who work within the realm of ‘the other’ experience and equally, many find it scary if not nurtured correctly. Healer Josie has been practising for eight years and whilst she initially focused on energy healing, she now incorporates sound healing and light language, even releasing an ethereal light language album, Light Language Transmissions: New Earth in 2020.

Starting with Reiki training, Josie bought her first crystal bowl around five years ago. Using bowls she began to weave sound into her sessions. Around the same time, she also began to channel light language.

Light language is a way of “channelling vibration, light and sound” into the physical Josie tells me. Which can be done “through the body, through movement, through hand gestures and mudras, and also through the voice.”

As well as being able to channel and hear light language, some people have the ability to translate what comes through.

She mentions a time when she was channelling light language for a client and they became very emotional during the session, saying to Josie "I didn't know you could speak Hebrew". The client translated the words which she heard in Hebrew as ‘see the light’. “It was at the start of my journey with sharing light language so it made me realise how powerful it is as a healing tool and how it is here to be shared.” Working with energy and spirit has brought with it a lot of magic, synergies and miraculous shifts she tells me. But one thing remains: “I will never stop being blown away by it.”

During the first lockdown, Josie  was still living in London and in the midst of a water fast. Recounting this time wandering through the woods of east London’s Hackney Marshes Josie described the way that a water fast opens up your energy. As she meandered through the marshes, singing along the river and asking the forest if she could channel its soul, a song came to her. She continued singing it through to the next day and when she felt the urge to Google the words, which she doesn’t “normally do, but I just had a feeling”. The words were from an African language and translated to ‘the forest is alive, the forest is psychic’.

It’s these experiences, as with any work in this field, that allow the ego to be removed and confirm that there is some other force that we can’t explain at play.

Through her work she has experienced her own healing and initiations and it’s these that shape what she offers to others today. One such service is womb healing. “It’s something that I integrated into my practice a few years ago. Working with women to connect with the wisdom of their womb space,” Josie explains. In the same year that she birthed her light language album, she also birthed her daughter Violet into this world.

Of her own transition into motherhood, Josie says it felt very natural, like a remembrance. She describes it as one of the most beautiful experiences of her life. “I have shivers now actually,” she reminisces. “It’s just pure love and resilience and strength. Meeting with yourself as the mother from the maiden is a profound journey. I don’t think I could anticipate how much I would feel transformed. It’s the most transformative process. If I was going to try to put that into words I would just say that it’s connected me to my most authentic self and to my heart in such a profound way.”

Pondering on this, I ask if there was a grieving process that took place during this transition, from the loss of Josie, before motherhood. She nods: “Yeah there was grief that I experienced in the first year post-birth, it was a grieving of my maiden. It’s a [time of] reflection - you reflect on how things were and knowing things won’t be the same again.” It seems like a natural process to go through, our whole identity changes upon entering motherhood, and grieving for who we were pre-child will allow us to make space for this new identity. “It’s healthy to feel the grief and to honour it. It’s a huge identity shift,” she agrees describing how all of your belief systems change.

As well as the grieving there is also space for more flow, more presence and more joy. “Motherhood is all about flow,” Josie notes. “And that’s taught me so much about really being in my feminine and surrendering daily, multiple times a day, to any control, to anything I think should be a certain way.” Which makes sense. A small child or baby does not understand a schedule and the need to be in a specific place at a specific time. It is this surrender and flow, Josie points out, that has allowed her to be more present than she has ever been.

“With that constant practice of surrendering to the flow, life is flowing. I surrender to Violet’s needs as I surrender to her flow. When it comes to working, I flow around Violet as much as possible.” The transition into healing service again after 14 months off and stepping into it again as a mother has been very empowering. “We are finding our unique flow as a family so that we can weave our soul work with parenthood and give our full presence to our daughter,” she says.

So what next for Josie and her healing practice? She has recently started sharing a monthly sound healing transmission both online and in person in Dorset, and also regular healing offerings online and in person for women and mothers to “receive and be mothered”. As well as this her next light language album is in the process of being created and will be released this year. “I also have some exciting sound training offerings coming up for those who are seeking guidance with light language and crystalline sound,” she enthuses. “I am making plans to come back to London to share healing offerings this year. There are some really beautiful things being created within me to support women which will be ready to birth into the world soon.​”

“Becoming a mother for the first time has inspired me to support others who are seeking a spiritual connection and seeking a community - seeking that holding that our society doesn’t give them.” And in a world where support for mothers is seriously lacking, it will surely be welcomed with open arms.

Title image thanks to Ste Marques