Erin Prichard speaks with Francesca Camporeale on how a trauma-sensitive approach can change the yoga landscape. 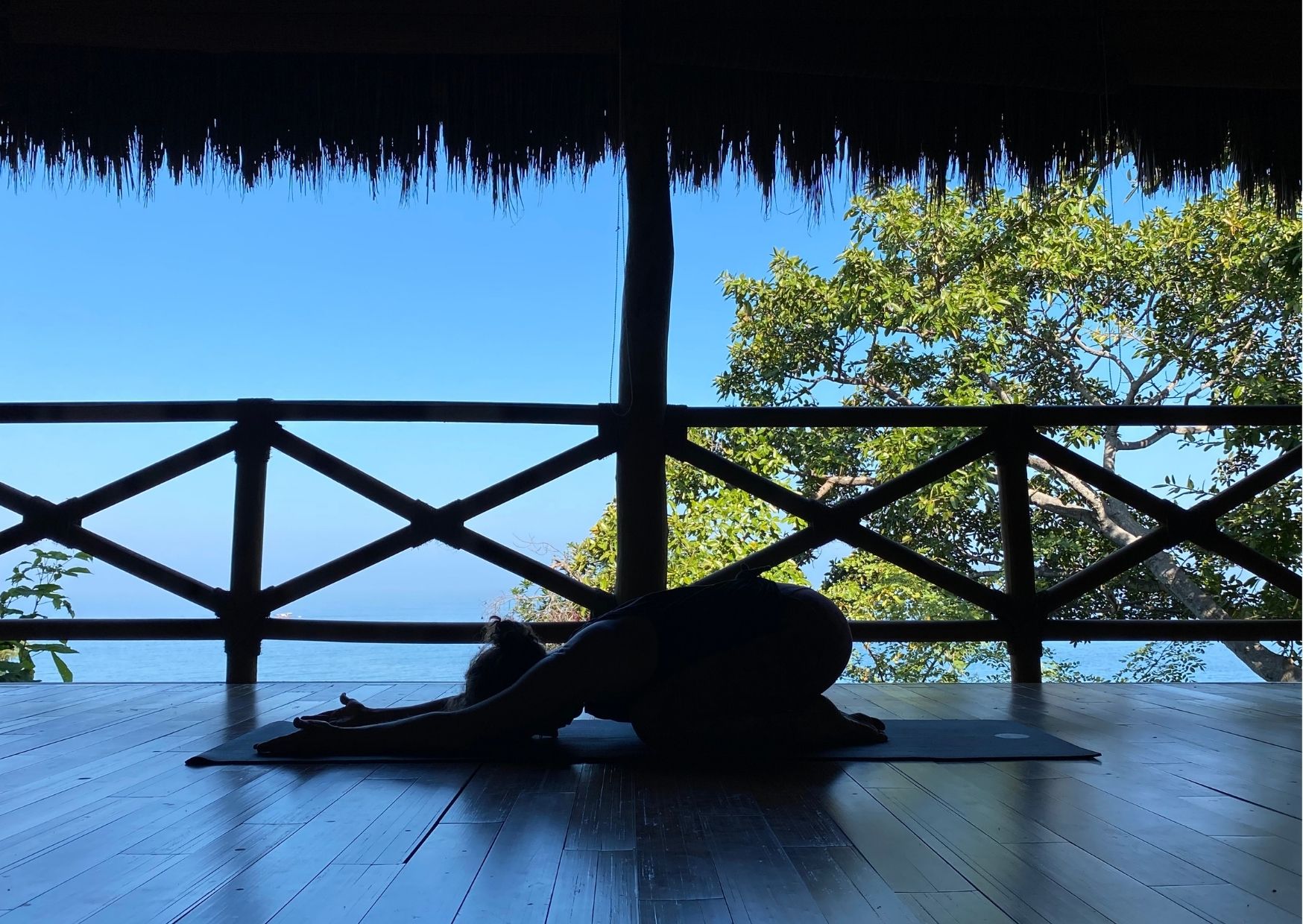 Erin Prichard, yoga teacher of 18 years, saw her perspective on teaching and yoga as a healing modality shift immensely when she began delivering classes at HMP Wandsworth. Inclusion and accessibility have always been focal to her work, having taught at refugee centres, SEN schools, and trained in trauma sensitive yoga and yoga for people with disability.

We had a chat about what it means to be trauma-informed, what trauma sensitive yoga looks like, and how Erin’s experience teaching at HMP has altered her narrative as a teacher.

Tell us about your yoga journey, and what has led you to where you are today.

I started yoga when I first went to university in 2000. I had just left home and moved away from the beach, which at that time was my meditation, and I began partying too much and lost my way a bit. I started getting interested in Buddhism and studying eastern religion. A friend dragged me to an Ashtanga class. Like many, I became hooked at the gate, and shortly thereafter, my life quickly began to shift in unimaginable ways.

4 years later, I did my first teacher training, in classical Hatha Yoga, in 2004. I then moved to London from the US, and was working as a primary school teacher and teaching yoga classes in community spaces, as well as at the school. Most of the kids were refugees from war torn countries, and had experienced a lot of trauma. Yoga helped them immensely, and I started to look at the practice and its potential benefits differently.

I have always been interested in making yoga more inclusive and accessible. I've taught all over London from studios, to businesses, to SEN schools to refugee centres. As much as I love teaching in studios, I have always been drawn to working with different communities, particularly marginalized communities.

About 4 years ago, through Live Karma Yoga, I started teaching at HMP Wandsworth. This is where my path has started to shift completely. I know yoga can be a healing modality for many, but this experience has really blown me away. I’ve gone on to complete a few trainings on trauma, inclusion, and making yoga accessible for all bodies. Most recently, I became a Trauma Sensitive Yoga (TCTSY) Facilitator.

What does trauma-informed yoga mean?

To be trauma-informed, to me, means being sensitive to what someone may have been through and trying to create an accessible space that establishes trust and safety.

In a trauma-informed setting, the teacher has knowledge of trauma and an understanding about the effects of trauma such as flashbacks, disassociation,and triggering. There is an emphasis on creating safety, and the power resides within the individual, not the teacher, to heal and to become embodied. There is a focus on embodiment and interoception in a safe way that can promote feelings of physical, emotional, and psychological safety.

Some survivors experience dissociation which leads to disconnected feeling from their body and their surroundings. A trauma-informed class allows space to explore reconnection in a safe way. It is more about feeling your body and that you have a body rather than being in some ‘perfect’ shape.

How has how you teaching and your perspective as a teacher changed?

I think my teaching has changed massively – I now think a lot about how we never know what is going on in an individual's life or what has happened to them. I am way more aware of power and privilege dynamics, and how these can be used as a tool of oppression rather than empowerment.

Sometimes as a teacher, our own egos get in the way, because we are constantly hearing from students how yoga has helped them. We have to check ourselves, not to think that we are the ones helping, or trying to change our students, which reinstates unhealthy hierarchical power dynamics. I really believe the healing and the power is coming from within the individual, and from tools yoga offers.

I think as teachers it is our responsibility to continually ask ourselves why we’re doing what we’re doing. Is it for me, or is it to support an individual on their own journey?

How do we bring the philosophies of yoga into our role as a teacher, and what does the teaching of ahimsa (non violence) actually mean in this context? There has to be a continual process of svadhyaya, self reflection, in this role.

Coming from an Ashtanga background, there is often a set way of doing things, and I no longer believe that to be true. I also think it is not, nor should it ever be, about the teacher. It is always about the individual's journey and their own relationship to their bodies and their own practice.

Becoming more trauma-informed, I have begun to question the traditional lineages of yoga a lot, how they have been taught and how much abuse there’s been. Studying and having an understanding of the context and the history of the traditions is important, but I think we need to consider how yoga can evolve in a more trauma-informed way, whilst still keeping the thread of tradition.

From a trauma perspective, sharing power is a key factor in recovery; but how can we share power within a structure that is hierarchical and patriarchal?

How has teaching at HMP Wandsworth been different to what you expected?

It has been mindblowing, humbling and inspiring to support the people inside. At the same time, it can be tragically sad and frustrating to see how broken the system is.

Each time I go in, I don’t know what it’s going to be like: has something happened in the prison that day? Have they transferred men from different prisons or wings? Is there enough staff to run things as planned? What is the energy of the prison that day? How long has it been since they were just lastlet out of their cells? What is personally going on for them? Are they awaiting sentencing or visits? Do they have a new cell mate?

There are so many moving parts, which means a lot of patience,adaptability, flexibility, and empathy is required.

Before I started at HMP, I wasn’t sure how yoga would be perceived, and what the men would get out of it. I also wasn't sure if I was equipped enough to be there. After meeting the men and teaching a few classes, I was amazed by their reception and feedback of the practice. You could see a difference in them from when they stepped on their mat to when they step off. After 4 years of teaching at HMP, I am still astounded by how well the yoga has been received and how many of the men value their practice. For some of them, it is the only thing they look forward to all week.

What shifts have you observed in that space, amongst the students, in relation to the yoga?

There are some massive shifts! Some of the reflections from the participants have been that they feel more calm, less reactive, more accepting of their situation, able to control their emotions, able to work more on forgiveness and moving forward, working on rebuilding their lives and their relationships. The staff often say they notice after the men do yoga, it changes the rest of their day.

Sometimes the men are really agitated when they come in for yoga, because of something that is going on in the prison, or they’re working through personal stuff.  You can then feel how throughout the session the energy just completely drops, as they start to settle into their bodies and find more ease.

I remember once teaching a man, who was really struggling with his mental health and had been in the system for many years having been extradited from his homeland, away from all family and friends. At first he did not want to try yoga, but over time decided to give it a go.

Within one session he said it was the first time in 17 years he had found even one minute of peace and that he felt himself. To me that was everything. Even just for a short time being able to be in his body -that’s what yoga is really about - finding reconnection and a moment of feeling free.

In your opinion, how and why is yoga of value for people dealing with severe trauma?

I do not think that yoga is the cure for everyone, or that everyone should do yoga. But I do think it can be an incredibly powerful tool for healing and empowerment for some.

Trauma-informed practices can help survivors safely reconnect with their bodies so that they can engage more fully with their life.

By focusing on the felt sense of the body to inform choice-making, TCTSY allows participants torestore their connection of mind and body, and cultivate a sense of agency that is often compromised as a result of trauma.

What are you hoping to do next?

Eventually, with Live Karma Yoga, we want to offer teacher training programs both inside and outside the prison gates, with the intention of giving people a new skill with the hope that they may want to teach other people who have been through similar experiences as them and to communities that are often discriminated against.

Francesca is a freelance writer and editor based in London.

Her interests have always kept her orbiting the realms of wellbeing, self development and community wellness, and she previously worked as a vegan chef, travelling around Europe and the UK cooking on retreats and events.

Francesca’s work is inspired by ancient wisdom and modern tools, patterns of the natural world and human nature, and a quest for holistic balance.

Events, Retreats & Travel
Journey To The Heart - A Desert Escape